The American Bottlers of Carbonated Beverages convention came to Atlantic City New Jersey in November 1952 and among the multitude of brands was a new brand which was being introduced to the bottlers attending. This brand was built more on the mascot for it rather than upon the beverages themselves. I’m speaking of the Donald Duck Beverages line which included not only the flavor line, but a cola made with “the improved Pemberton formula.” That woke the Coca-Cola fans up. For those who don’t know John Pemberton was the inventor of Coca-Cola, so the company is claiming to have improved Coca-Cola essentially. The Donald Duck flavors were black cherry, grape, lemon lime, orange, root beer, strawberry, ginger ale, lime, cherry, cream soda, and of course the cola.

Before we get into who the owner of this brand was let’s examine what has become the predominant legend behind this brand, and that is the claim that the Donald Duck Beverages line was “Double Cola's gateway into the flavor beverage field.” I’ve seen this all over the internet, and was reminded of it when someone asked me about the connection between the two through my Vintage Soda Group on Facebook. I’ve done research into Double Cola, and my article on the early days of the brand has been published on this very blog, so I think I would have found a connection if there were one.

So I decided to give it a whirl, first stop was the November 11, 1952 edition of Bottling Industry, a period magazine format “newspaper” for the industry, which had a write up about the introduction of the brand at the aforementioned convention. Certain things troubled me about the connection to Double Cola, one of them being that in the very same issue of Bottling Industry they have an article on the Seminole Flavor Company’s building of a new plant in Chattanooga, Tennessee, and they name check not only Double Cola, but the Double Line brand as well. In other words Double Cola had no need for a “gateway into the flavor beverage field”. They’d had one since the Jumbo Beverages line in the 1920’s, and Double Line Beverages had replaced that one in the early 1930’s, and obviously was still going strong by 1952.

My next stop was of course the internet, where I found many cut and paste versions of the same line I noted above, and a few rewordings, but eventually I started hitting pay dirt. The corporation who owned the Donald Duck Beverages line was General Beverages Incorporated of Chattanooga Tennessee, the fact that they share the same town with Double Cola may have been the start of this legend. So the question became who was General Beverages? I found my answer in a court case where someone was trying to get money for a promissory note from the Lime Cola Company Incorporated of Montgomery, Alabama.


The Alabama Corporation had gone bankrupt in 1948, and in June of that year, pursuant to an order of the court, had transferred their assets to the Lime Cola Company of Chattanooga Tennessee. In July 1952 the Lime Cola Company of Chattanooga, changed its name to General Beverages Incorporated. It all makes sense when you realize that Donald Duck Cola was actually a Lime Cola, basically just an old brand with a new name. Double Cola wouldn’t be involved with a competing product of their leader brand from a former competitor. That just makes no business sense.
You have to give Donald Duck Beverages their due, they certainly were a hit, and promotion of the brand included Clarence J. “Ducky” Nash, the voice of Donald Duck, making a series of nationwide appearances to promote the new brand. When the brand was introduced at the convention they already had franchises in Chattanooga, Tennessee, Sumter, Greenville, Rock Hill, Spartanburg, and Aiken South Carolina, along with Augusta, Georgia. They were also on their way to introduce the brand to the rest of the United States and Canada. Like any large beverage producer they were ready with local distributors of bottler concentrate in Chattanooga Tennessee, Los Angeles California, Peoria Illinois, Syracuse New York, and Ottawa Ontario, Canada.

Quite possibly the largest contribution to the Beverage Industry by the Donald Duck brand may have to be General Beverages President Jack Harkins, formerly of Pepsi-Cola, who was determined to latch onto this new idea of producing soda in cans. In 1953 the corporation announced to its bottlers that they were going to make a huge push to canned products, and in September 1954 they opened their first of eight regional canning plants in Miami, Florida. This plant held the franchise for Florida, Southern Georgia, and Puerto Rico. One reason for Miami being the first was that it was an excellent stepping off point for the Central, and South American markets.
This was of course a step that was obviously taken as we do find that Donald Duck Beverages was being marketed there under the brand name Pato Pascual, or Pascual Duck, in the 1950’s by Embotelladora Pascual. This company had been founded in the 1930’s and 40’s by Victor Jimenez Rafael Samudio. The company took the Donald Duck logo from the bottles as their own after the brand disappeared in the United States, and were sued in the 1980’s by Disney which resulted to minor changes to the logo. That wasn’t enough for Disney who forced the logo to be changed again in 2007, now the duck has ruffled feathers with a baseball cap turned backwards.

There are several different versions of the Donald Duck bottles, and the cans come in cone top and flat top styles. There are many other items to collect from this brand as well including bottle cartons, crates, advertising, and bottle caps all with Donald’s face on them. The competition between soda and Disney collectors has meant that the prices of some of these can be at a premium especially the cone top cans. Don’t confuse the Donald Duck soda line with the Donald Duck Juice line, introduced in 1940, which is owned by Florida’s Natural Growers agricultural cooperative which was once known as the Florida Citrus Canners Cooperative until 1969, and Citrus World until 1998.

Unfortunately details of what became of General Beverage Incorporated are sketchy. According to a comment on one of the websites that claimed a connection to Double Cola, someone, whose father had owned stock in the corporation, found a hand written note with the stock saying that the corporation had their charter revoked for non-payment of taxes in 1957. This does track with the last mention that I can find for the brand in Google Books which is in a 1959 bulletin from the North Dakota State Laboratories Department who were testing the line from one of their local bottlers. I seriously doubt that, aside from the Pascual version of the brand, they made it too far out of the 1950’s. As an interesting side note, it appears that it was the, bankrupt and abandoned, Donald Duck Bottling Plant in Lynchburg, VA that was chosen for the permanent home of the first Baptist church headed by Jerry Falwell, the famous American television preacher, on June 25, 1957.


As some of you may know my blog post named “Those thevin’ varmints: the imitators of Mountain Dew” I briefly conveyed the story of Nugrape’s Kick-A-Poo Joy Juice which owed its name to the Li’l Abner comic strip, and the creator of that strip, Al Capp. The thing is Kick-A-Poo Joy Juice wasn’t Al Capp’s first venture into soft drink promotion. In fact it was nearly fifteen years prior when Li’l Abner, via Al Capp, announced that Orange Crush was “th’ offishul drink of Dogpatch”. Information on this Orange Crush promotion was almost non-existent until my coming into possession information from the records of the Marion Bottling Company at a bottle show.

Al Capp created his Li’l Abner Comic strip in 1934. The strip is based in the backwoods Kentucky town of Dogpatch, and the main characters are the lovable hillbillies who live in this town and their adventures. The lead character is Li’l Abner, the “Ideel red-blooded American”, and is constantly being romantically pursued by Daisy Mae, which Li’l Abner apparently is oblivious to. By 1950 Capp’s readership had reached 50,000,000 daily readers, and had even created Sadie Hawkins Day which is celebrated by dances where the traditional gender roles are reversed and the women ask the men to the dance. In fact my high school still held a Sadie Hawkins Day dance when I was attending back in the early 90’s. That’s a long run for something based on a comic strip that had stopped being produced in 1978.

As you can see Orange Crush were quite happy to sign the deal with Al Capp in July of 1950 to have Li’l Abner, and the rest of Dogpatch, KY, to promote the soft drink to their fans. Within ten days of the signing of the deal, the Chicago Beverage Company, who held the Chicago Orange Crush franchise, created a thirteen week half hour television show named “Crushable Jones’ Jubilee” which was being filmed on location in a studio at the 1950 Chicago Fair. Crushable Jones was a character specifically created by Capp just for this promotion, and he was basically a hillbilly in a soda jerk hat and a horrible wig which I would bet my life was bright orange. The show was shown on WGN-TV in Chicago which had just hit the airways in April 1948.

The August 1950 edition of Orange Crush’s in house magazine O-C News has a drawing on the cover with Li’l Abner bent over to talk to Crushy, Orange Crush’s mascot, and informing him that he has just received his Dogpatch citizenship papers. In fact the whole issue is devoted to the deal with Capp and announcing that “Orange Crush hitches to a star”. The company even produced special cartons decorated with Li’l Abner characters and designed to resemble log cabins. Of course advertising was a huge part of this campaign which took the form of posters, twenty five different full page ads in Li’l Abner comic books, and premiums to be given away.

Today the most common surviving premium from this promotion are the fake tattoos featuring Li’l Abner characters, and the envelope they came in which features many of the characters around the table praising Orange Crush. These can be found on ebay at any given time and are often mistaken as being from the thirties. From the looks of the photo from the O-C News there were so many more premiums to be had including inflatable bop figures, comic books, rubber balls, ear muffs, character statues, glasses, clocks, stuffed animals, posters, lamps, and even latex masks. As the ad shows you could get one “offishul dogpatch” rubber mask for only fifty cents with six Orange Crush bottle caps. The offerings were for Daisy Mae, Li’l Abner (as seen worn by one of the actors on Crushable Jones’ jubilee to creepy effect), Lonesome Polecat, and the Wolf Gal.

As to what became of the promotion, or how long it lasted, there just isn’t much information. One thing I do know is that it lasted long enough for a second toned down version of the bottle carrier to be created. But like most promotions, the Orange Crush Li’l Abner one came and went. The remainder of the 1950’s went pretty good for Al Capp and his creation. In 1956 a Broadway musical was created from the comic strip, and eventually in 1959 a feature film was based off that musical. Al Capp retired in late 1977 due to advancing illness, and died on November 5, 1979 of emphysema at 70. His legacy will live on through his character Lil’ Abner and all of his Dogpatch pals. 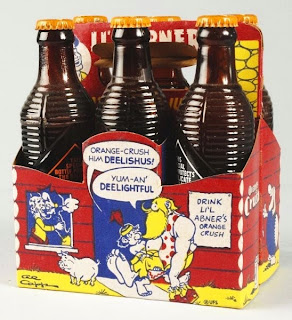